The OPV’s Report on Extremism: An Attack on Revolutionary Anti-Fascism 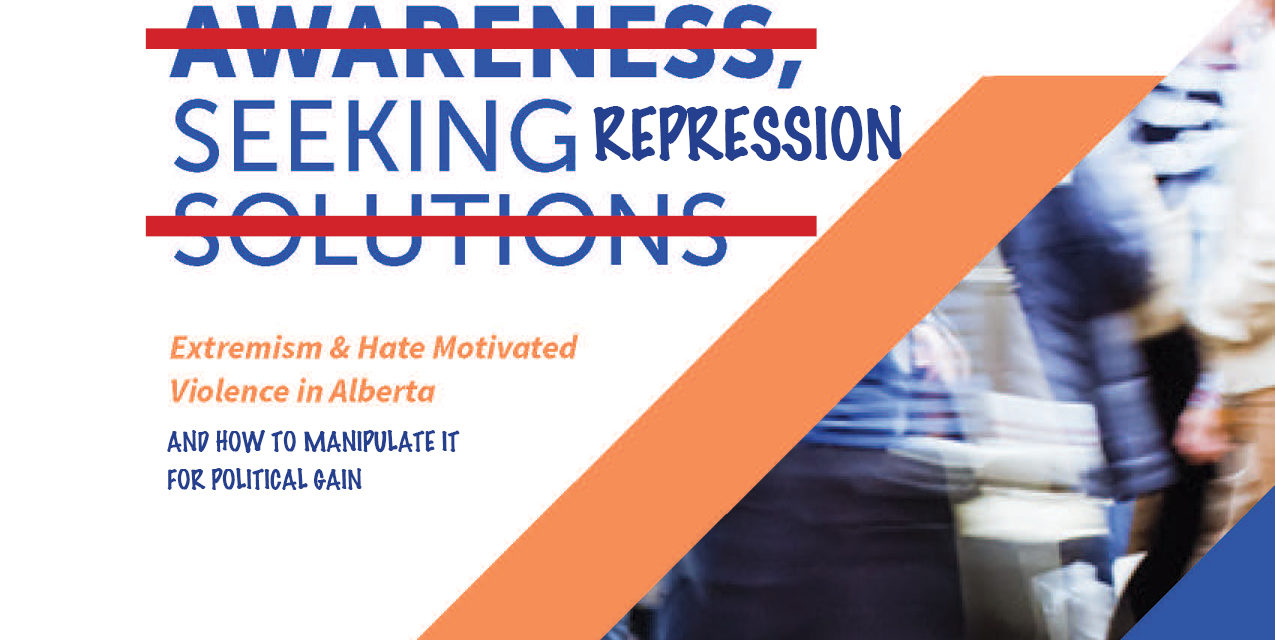 What follows is a useful statement by a comrade in Alberta, regarding a recent publication by the Organization for the Prevention of Violence, a government-funded research entity. We at Montreal Antifasciste are translating and publishing this statement, as the issues it addresses are by no means specific to Alberta alone. So-called “horseshoe theory,” lumping all anti-system movements together as “extremist” and positing a “mutually reinforcing process” of “Reciprocal Radicalization” between opposed groups, is the natural framework for state repression and its apologists.

As we wrote in 2017 regarding our own local example of this phenomenon:

“Organizations [like these] are predictable parts of the landscape for those involved in the antifascist struggle. Anti-fascism isn’t simply a struggle between two adversaries: us against the Nazis. It’s a three-way fight, with us not only in a battle with the far right but also against state and para-state organizations, which are just as hostile (if not more so) to the radical left as they are to the far right. Generally speaking, these state and para-state entities have a privileged relationship with the media and with other state bodies, as well as generous funding, all of which allows them to take up a great deal of space in the debate about the far right.”

We encourage comrades to read the statement that follows from Alberta, and to keep their distance from entities like the OPV (or locally, the CPRMV). For your own safety, and the safety of our movement.

The OPV’s Report on Extremism: An Attack on Revolutionary Anti-Fascism (by Jason Devine, Calgary Anti-Racist Action)

Recently the Edmonton-based Organization for the Prevention of Violence (OPV) published a report entitled Building Awareness, Seeking Solutions: Extremism & Hate Motivated Violence in Alberta (2019). First, who is the OPV? On their website they claim to be an “international best practice model of countering violent extremism.” While they do not say who globally deemed them to be the “best practice model” beyond their own self-designation, they do state more specifically that they are a “diverse group of professionals with experience in CVE and other forms of violence and risk reduction.” According to the OPV they have “developed partnerships and working relationships with the Edmonton Police Service (EPS), Royal Canadian Mounted Police (RCMP), Government of Alberta, City of Edmonton and REACH Edmonton.” Significantly left out of this list of allies is Public Safety Canada. This government department is concerned with terrorism and crime. According to the Calgary Herald, it provided the OPV with $1.2 million in funding to produce this report. The OPV, then, is a think tank which is funded by and works for the Canadian state.

The report claims that “There is a diverse array of ideologies and movements that are driving extremism and violent extremism in Alberta.” It further asserts, even more urgently, that right now in Alberta we face a “diversity of threats” from six types of extremism. These are listed as Al-Qaeda, its Aﬀiliates and Splinter groups (AQAS), Anti-Authority Extremists, Left-Wing Extremism, Patriot & Militia Groups, Single-Issue, and White Supremacy & Associated Ideologies. Anyone with even a smattering of knowledge of these groups knows that there is no common ideological denominator. How then does OPV group them together? It does this with its basic, constant tactic viz. amalgamation. Different terms, such as hate, violence, extremism, and terrorism, are used interchangeably. However, this is not a sign of theoretical confusion but a quite conscious choice. By subsuming such different groups under the single umbrella of violence, the real differences in history, ideology, and practice of these different phenomena are waved away. Moreover, the overall threat level from all these groups is heightened. Indeed, the report openly declares that “All of the movements have the potential to generate threats to public safety and undermine our social fabric.” As can be seen, the tone of the whole report is utterly alarmist.

The section that most concerns us is on so-called “Left-Wing Extremism.” It should be noted straight away that it is riddled with errors, lies, and exaggerations. For example, the report states that “Decentralized chapters of groups like Anti-Fa have been successful in garnering support internationally, organizing around shared goals of socialist and non-discriminatory politics.” Yet there is no group called “Anti-Fa.” The OPV gives no evidence of the former’s supposed existence, nor can they because it does not exist. There is certainly a world-wide anti-fascist movement, but there is no organised formation called “Anti-Fa”. While it would be easy to chalk this up to shoddy research, it is more likely that this is more fear mongering and lying in order to justify having this section included. The report also claims that the website Anti-Racist Canada (ARC) is one of a number of “self-designated ARA groups.” But ARC is not ARA, is not a part of ARA, is not recognised as a part of ARA, nor has ever claimed to be ARA. One last example: the report claims that Calgary Anti-Racist Action promotes “socialist ideology.” But this is a direct lie. Calgary ARA is neither socialist or anarchist, but an anti-capitalist organisation with a variety of members, some of whom are communist, socialist, and anarchist. This has been a matter of public record for over a decade. So much for $1.2 million worth of research.

It is significant that the report’s “analysis” of so-called “Left-Wing Extremism” starts on page 74, but the discussion of Alberta does not even begin until page 83. Those 9 pages were spent talking about everywhere else but Alberta. Also, none of their citations in this section have anything to do with Alberta. Except for one article about Ottawa, the rest concern the USA. The OPV has absolutely no documentary basis for their claims regarding Calgary ARA.

Near the end of this section, in making a summary of the threat situation, the OPV make the startling observation that

To date, LWE in Alberta has not generated any major violent incidents in Alberta. It is important to note that the groups and individuals in the movement, based on their current tactics and behaviour, do not represent a threat to members of the general public in the province and there are no indications of planned violence…The movement on the whole is largely peaceful…

Any reader would immediately ask themselves: why was ARA included? This is especially so in light of what is written shortly after the above:

In our interviews with law enforcement agencies throughout Alberta, multiple respondents identified the presence of militant anti-fascists as a local concern, but none were able to point to discrete instances of planned violence that posed a serious threat to members of the general public.

The report included revolutionary anti-fascists because they are allegedly prone to violence. But then the report admits that neither in the past, nor in the present, and not even in the future, is there any concrete example of “planned violence.” So why the inclusion? It should be clear by now: to justify the claim that there is a multiplicity of extremist threats. It is no accident that the largest portion of people interviewed were law enforcement. The fact is that this report represents the views of law enforcement in Alberta. The OPV, as a think tank for the state is, therefore, blatantly a mouthpiece for the concerns, interests, and worldview of law enforcement. This is not a work of academic social science, it is an expensive propaganda piece designed to justify and legitimize the Canadian state, its ideology, and its powers of surveillance and social control.

Finally, I want to point out that I was contacted by the main author John McCoy (Executive Director, OPV) last year. We spoke repeatedly via email and met in person. He had written to me asking for help in his research. However, as his emails to me show, he repeatedly misrepresented his work. He claimed that he was working on a “report on white supremacy in Alberta,” one which would target “right wing extremism in Alberta with a sort of “counter narrative”.” He frequently asked me for insight into Blood & Honour and other groups. Believing he was merely an academic, I shared what info I had. As he said on another occasion: “I am continuing to conduct research on right wing extremism in Alberta.” At no point did he tell me the full scope of his research. Thus while I thought I was helping some professor with his research, ARA was actually being investigated! His approach was thoroughly dishonest and manipulative. Especially as this was at a time when Blood & Honour had leafleted our family’s house and threatened us again. McCoy had presented himself as caring and interested, but his only goal was establishing his law enforcement narrative of Calgary Anti-Racist Action (CARA) being a very public threat.

CARA is an anti-capitalist organisation which adheres to Anti-Racist Action’s “Four Points of Unity.” As the first point states “We go where they go. Whenever fascists are organizing or active in public, we’re there. We don’t believe in ignoring them or staying away from them. Never let the Nazis have the street!” This is based on the understanding that a fascist who is unopposed becomes emboldened to act on their genocidal ideology. Fascism will not die of its own accord, and hence it must be actively defeated. For if one defines fascism solely by concentration camps, it will be too late for one to do what needed to be done. The point is to stop it, by any means necessary, before it gets to that end.

This strategic awareness leads us to the second point of unity:

We don’t rely on the cops or courts to do our work for us. This doesn’t mean we never go to court, but the cops uphold white supremacy and the status quo. They attack us and everyone who resists oppression. We must rely on ourselves to protect ourselves and stop the fascists.

The state is the institutional basis for fascism, and as such, cannot be trusted with the task of defeating fascism. Moreover, as one of the roots of the latter, it, along with capitalism-imperialism, must be smashed. We are revolutionaries and, therefore, our anti-fascism is not liberal, but radical and militant i.e. revolutionary. To quote the final line of the fourth point of unity: “We want a classless, free society. We intend to win!” 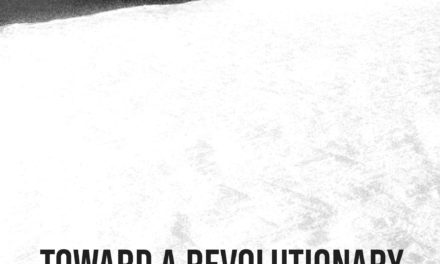 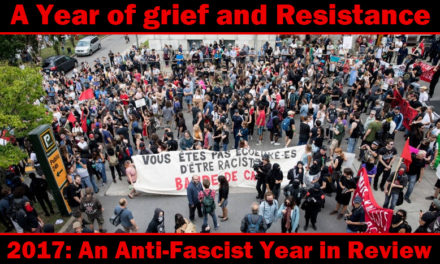 An Anti-Fascist Review of 2017 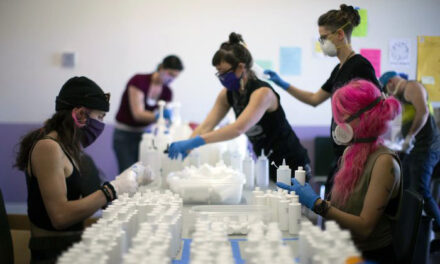 Fascism and Antifascism during a Pandemic 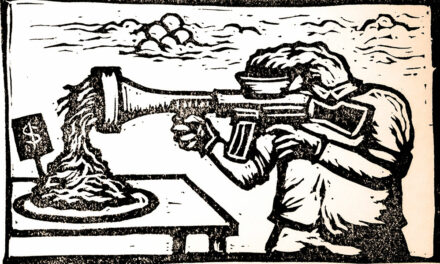 The Hypocritical Conduct of a Hegemon in Crisis