Horizon Québec Actuel was formed in 2016, in the wake of Pierre Karl Péladeau’s resignation as leader of the Parti Québécois and shortly following a meeting between three PQ members and Marine Le Pen, the leader of France’s Front National. The organization, effectively an FN satellite in Québec, established a public presence in May 2017, when its president, Alexandre Cormier-Denis, ran for the Parti indépendantiste in the Gouin by-election in Montréal, conducting an extremely Islamophobic campaign.

Unlike most of Québec’s far right, Horizon Québec Actuel (HQA) has chosen to keep a low public profile, not calling any demos, or even publicly participating in demos called by other ultra-nationalist or far-right groups (although Vice President Philippe Plamondon was spotted at La Meute’s August 20, 2017 demo in Québec City, where he appeared to be taking photos of counter-protesters). Instead it has chosen to establish an online presence with a website, a Facebook page, and a YouTube channel (Nomos). The organization originated in the aftermath of a meeting held in Montréal with the French Front National leader Marine Le Pen and several members of her party in March 2016. The meeting was attended by three Parti Québécois members, Étienne T. Pelletier, Alexandre Cormier-Denis, and Philippe Plamondon. Two of them, Cormier-Denis and Plamondon, would form HQA shortly thereafter.

For all intents and purposes, HQA is a Front National branch in Québec. HQA openly uses the Front National platform as its basis of operation, and both Cormier-Denis and Plamondon are card-carrying members of the FN. So close is their relationship with the FN that, along with fellow PQ member Étienne T. Pelletier, they attended a FN congress in Paris in June 2016, where they presented a workshop on opposing multiculturalism. This is, however, a two-way street, not only does HQA draw its inspiration from the FN, but it is the only North American organization that Le Pen recognizes as part of the FN.

HQA’s website and Facebook page are littered with photos of Cormier-Denis and Plamondon posing with Marine Le Pen and other FN bigwigs. And Cormier-Denis, who generally acts as the group’s spokesperson, has been unwavering in his gushing admiration for Le Pen and the FN. He has argued for example that “Marine Le Pen’s patriotic discourse should be imported to Québec by a sovereigntist movement that has become increasingly removed from grassroots concerns.” [le discours patriote de Marine Le Pen devrait être porté au Québec par le mouvement souverainiste qui s’éloigne de plus en plus des considérations populaires] He has also challenged the characterization of FN as a far-right organization: “Mme Le Pen is not the leader of a far-right party. . . . Far from the anti-parliamentarianism of the far right, the Front National defends grassroots sovereignty and intends to base its reforms on a democratic process we are very familiar with: the referendum.” [Mme Le Pen Loin de l’antiparlementarisme constitutif de l’extrême-droite, le Front National défend la souveraineté populaire et souhaite faire reposer ses réformes sur un processus démocratique que nous connaissons bien : le référendum] He was quick to add that Le Pen was the “French presidential candidate most favourable to recognizing a sovereign Québec.”[Candidate présidentielle française qui sera la plus favorable à reconnaître un Québec souverain] It is little surprise that the FN front group Collectif Mer et Francophonie (COMEF), led by Loup Viallet,was one of the first off the block to congratulate HQA on its formation, releasing a communiqué on the FN website on June 8, 2016. Viallet has established his own far-right bona fides. Not only was he a FN candidate in recent elections, he has been interviewed on the Fédération des Québécois de souche website.

On its website, the HQA defines its mission as “the diffusion of the French language, networking among Francophone countries, and the defense of the principle of the sovereignty of nation states,”[la diffusion de la langue française, le réseautage entre pays francophones et la défense du principe de souveraineté des États-Nations] which translates into “defense against the disintegration of the national sentiment, the increasing disappearance of French as a factor, and the political marginalization of the Québécois people.” [Un rempart à l’éclatement du sentiment national, à l’effacement progressif du fait français et à la marginalisation politique du peuple québécois] In practice, Cormier-Denis explains, this means opposing “mass immigration, generalized anglicisation, and Canadian multiculturalism.” [« l’immigration de masse », « l’anglicisation généralisée » et le multiculturalisme canadien] While HQA’s primary concern may be the supposed erosion of Québec culture and immigration, Cormier-Denis also makes clear his opposition to most forms of social progress. In a June 2016 interview, in a bid at irony, he says, “When it comes to social issues (gay marriage, transgender rights, militant postmodernism, etc.) Québec is twenty years ‘ahead’ of France, which did not experience the brutal shock of the Quiet Revolution.” [Sur les enjeux sociétaux (mariage gay, transgenrisme, postmodernité militante, etc.), le Québec est vingt ans en « avance » sur la France qui n’a pas connu le choc brutal qu’a été la Révolution tranquille] All of this would seem to place HQA firmly in the mainstream of Québec’s populist far right. But where most of Québec’s far right are open in their racism and disdain for other cultures, in a May 1, 2017 interview with “Gravel le matin” on Radio Canada, Cormier-Denis puts forward the classic third position fascist canard. Claiming not to be a xenophobe, he says, “I’m a xenophile. I love foreigners, as long as they stay foreigners and understand that they are foreigners.”

Structure and Mode of Operation

It would appear that the HQA is made up entirely of its three sitting officers: founding members Alexandre Denis-Cormier and Philippe Plamondon, respectively the organization’s president and vice president. Since HQA’s formation they’ve added Sengtiane Trempe as a so-called strategist. The organization has no other known members.

Some of Their Greatest Hits 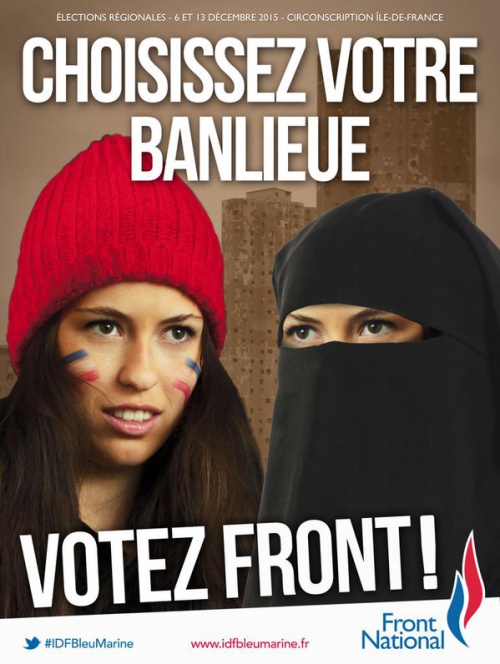 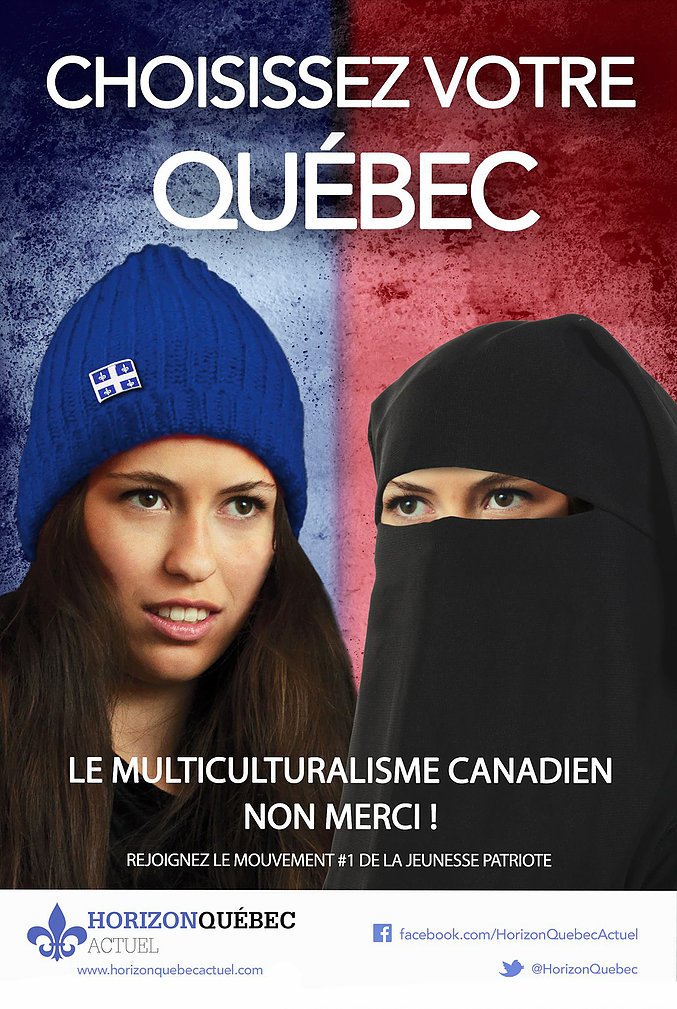 Other than its online presence, Horizon Québec Actuel is primarily known for its president Alexandre Cormier-Denis’s foray into provincial politics in the May 2017 by-election in the Montréal riding of Gouin, where he ran on the Parti Indépendentiste (PI) ticket. Garnering a total of eighty-one votes for a seventh-place finish, with the victor, Québec solidaire’s Gabriel Nadeau-Dubois taking close to ten thousand votes, Cormier-Denis’s campaign could be seen as an abysmal failure, but that would be to miss the point. Cormier-Denis built his campaign around a shockingly Islamophobic poster directly photoshopped from a Front National campaign poster. It shows the same young woman looking hip in a toque adorned with Québec’s fleur-de-lys flag on the left-hand side and wearing a burqa on the right (see below). The poster reads “Choose your Quebec. Canadian multiculturalism: No thank you.” As soon as the poster went up, police began receiving complaints and promptly removed it, but because it was deemed to fall short of violating hate speech, it went back up the next day. The whole kerfuffle gained both the xenophobic poster and Denis-Cormier a lot of attention, allowing him to introduce Horizon Québec Actuel to the public in a relatively mainstream context. Cormier-Denis never had any expectation of winning what is a safe Québec solidaire riding, and in reality things could not have turned out more favourably for him and his cohorts.

It is also of some interest that the PQ has allowed two of its members, Cormier-Denis and Plamondon, to continue to publicly identify themselves as members of the party while simultaneously flying their FN and HQA colours, and in the case of Denis-Cormier running in an election for a far-right party with a profoundly Islamophobic message. PQ Communications Officer Yannick Grégoire dismissed the issue, saying, “What they do on their own time is their business.” [Ce qu’ils font dans leurs temps libres, ça les regarde]

A few words about the Parti indépendantiste are in order here. The party was formed following the PQ’s electoral defeat in 2007 by Éric Tremblay and Richard Gervais, who argued that the PQ no longer had the will for independence. The PI for its part has said that if it were to win a majority in parliament it would unilaterally declare independence, even if it had failed to receive 50 per cent of the vote. The party’s ties to the neo-Nazi scene are well established. Sébastien Moreau, a known white supremacist from Québec City, was the president of the party’s executive committee until public exposure forced him to step down and leave the party in 2012. At the same time, Maxime Fiset, then the leader of openly fascist Fédération des Québécois de souche, was a recruiter for party in the neo-Nazi scene. As a side note, it is worth mentioning that when, in late December 2017, Option nationale decided to fuse with Québec solidaire, Denis Monière led a group of ON dissidents into the PI.