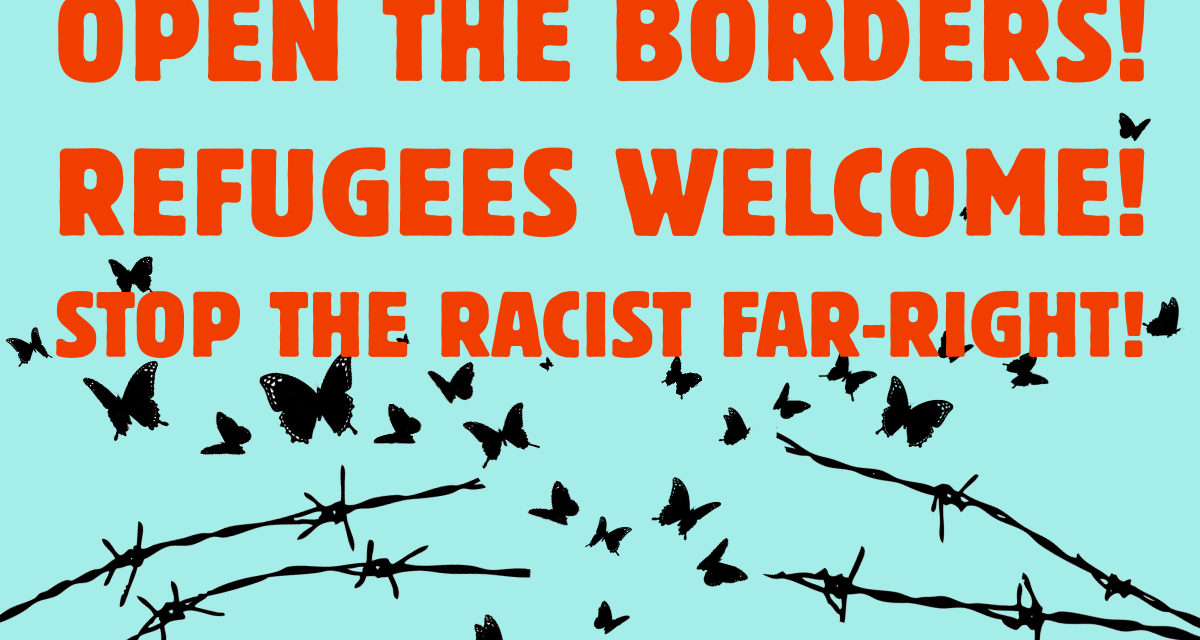 All out to the Canada-US Border at Roxham Road!

At the Canada-US Border, 1 hour south of Montreal.

*We encourage the large-scale participation of all who support migrants and refugees and oppose racism.

Endorse and share this callout, and mobilize your organizations, communities and contacts. To endorse, and to offer support, contact: solidaritesansfrontieres@gmail.com

— A callout by Solidarity Across Borders, Montreal Antifasciste and allied groups and individuals.

Far-right racists are again mobilizing to try to intimidate refugees who are crossing the border from the US to Canada at Roxham Road. Their racist organizing is being supported, directly and indirectly, by sensationalist media and demagogic politicians.

Migrant justice anti-racists in the Montreal-area are calling for a large-scale mobilization at Roxham Road to show our support for open borders and to welcome migrants. Our presence — festive, diverse, and in large numbers — will also effectively block the far-right racists from getting anywhere near the border (similar to mobilizations undertaken last year at both Roxham Road and Lacolle) and prevent their harassment of asylum seekers.

We are encouraging you to mobilize in your communities, networks and organizations, and to attend the gathering on May 19th.

For further information or context:

-> What is the Storm Alliance:
https://montreal-antifasciste.info/en/2017/09/13/storm-alliance-factsheet/

Refugees have crossed irregularly at Roxham Road and other border crossings across Quebec and Canada in larger numbers ever since the shameful Safe Third Country Agreement between Canada and the USA was implemented in 2004. This agreement prevents migrants from making refugee claims if they come to Canada from the USA at a regular border crossings. However, refugees can make claims if they make an “irregular” crossing at any other point at the border, such as at Roxham Road, which is a relatively convenient and safe place to cross.

There has been increase in irregular crossings into Canada by asylum seekers currently in the USA due to the rhetoric and policies of the Trump administration, which includes attempted travel bans and attacks on the integrity of entire groups, such as Africans, Muslims, Arabs and Mexicans. More recently, the Trump administration has announced the ending of ‘temporary protected status’ (TPS) for large groups of migrants currently living in the USA, originally from countries such as Haiti and El Salvador.

While numbers of asylum seekers have increased, and will increase to upwards of a few hundred crossing each day this summer, it’s important to note that the overall numbers do not constitute a crisis, as falsely promoted by right-wing media and politicians. The people crossing at Roxham Road, with community support and solidarity, are able to quickly settle and succeed in Montreal, Toronto and other locations, although they face an unjust refugee determination system.

Border crossings are happening in a  broader context, in which states like Canada and the United States are responsible for economic and social devastation in countries throughout the Middle East, Latin America, Caribbean, Africa, and Asia, and yet seek to limit who from those countries can live here.

Racist anti-immigrant groups like Soldiers of Odin, Storm Alliance and La Meute demonize and blame refugees. In contrast, we support and commend refugees who cross into Canada, and we express our welcome and solidarity.

We also demonstrate to reject the racist discourse perpetuated by sensationalist media and demagogic politicians, that contrasts migrants with the homeless and poor already living in Quebec. We call for a linking of the struggles of all oppressed, poor and working class people against the rich and privileged. Instead of blaming migrants for exercising valid choices, we focus on opposing and resisting systems of oppression, specifically colonialism, patriarchy, racism, and capitalism.

We campaign to build a Solidarity City, the creation of a community that rejects a system that engenders poverty and anguish, not solely for immigrants and refugees, but also for others confronting these same realities. We support open borders and the free movement of people seeking justice and dignity, meaning freedom to move, freedom to return, and the freedom to stay.

*A callout by Solidarity Across Borders, Montreal Antifasciste and allied groups and individuals.* 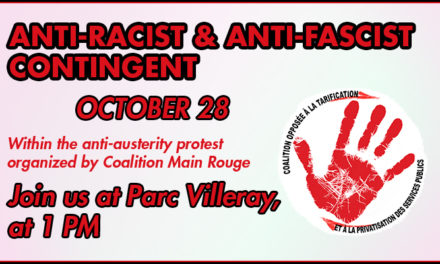 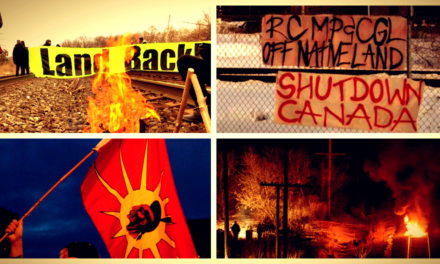 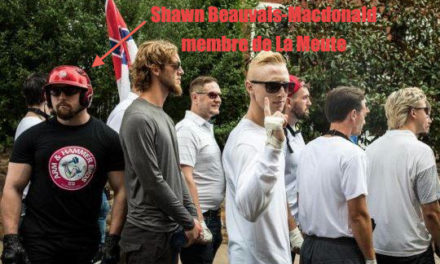 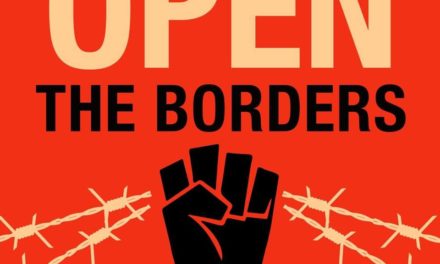