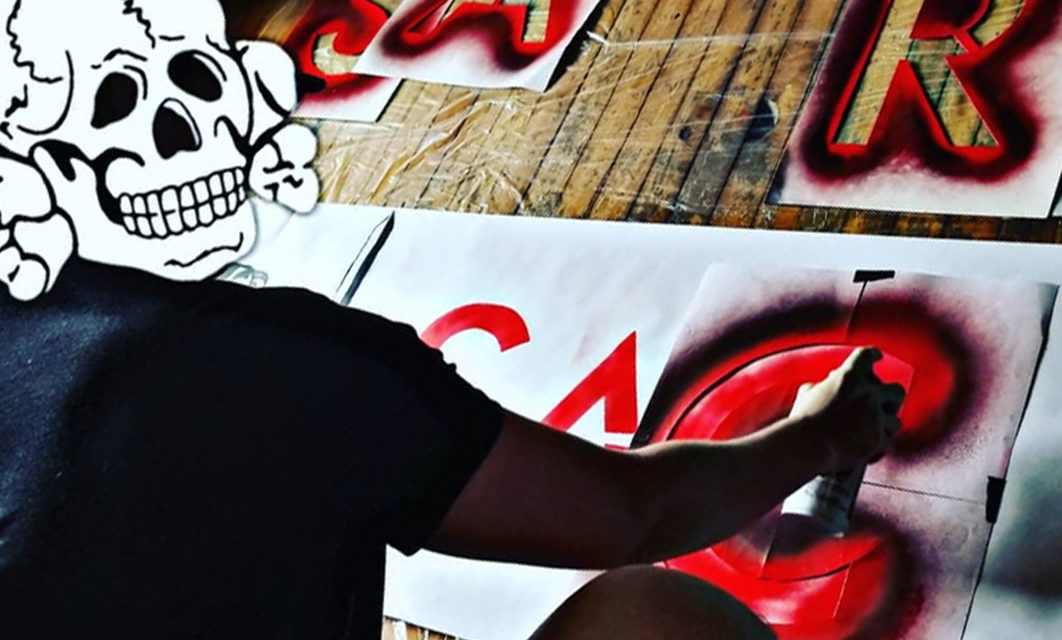 Whatever the interested parties may say, their neofascist/identitarian/national revolutionary/anti-communist/Nazi lineage is as clear as the Stompers/Légitime Violence/Atalante connection. The tattoos, fashion statements, musical tastes, and antics of the known Atalante members give some indication of their political orientation, and their sympathies are entirely and uncontestably “neo-Nazi.” 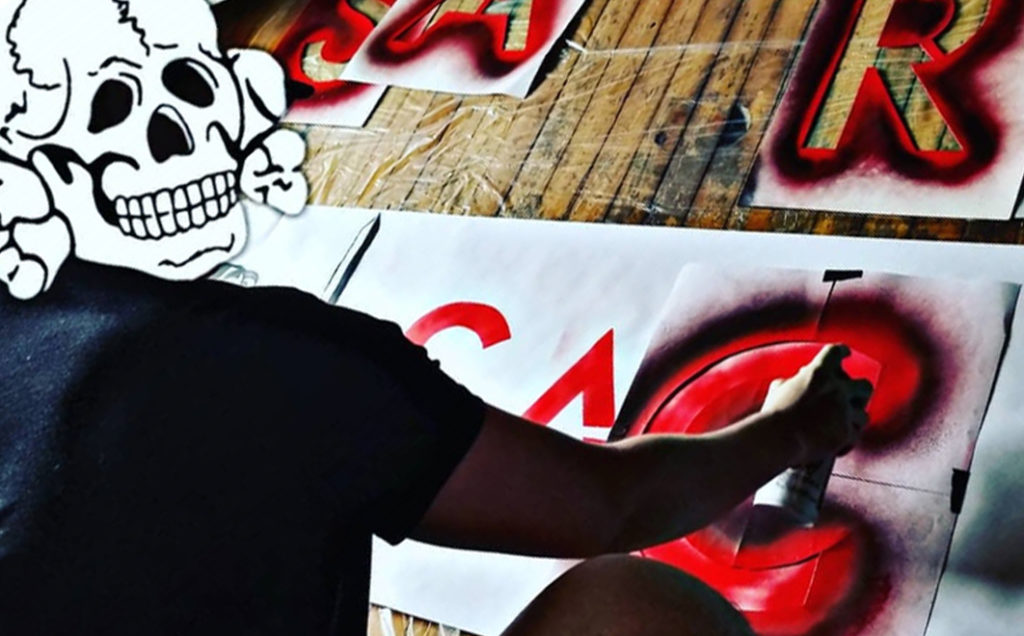 Between 2018 and 2021, the Montréal Antifasciste collective has published a series of articles aimed at countering the toxic influence and publicly calling out the members of the neo-fascist organization Atalante, which is primarily based in and around Québec City. This dossier is the result of a sustained collaboration between several antifascist activists and supporters in Montréal and Quebec City.

In September, Montréal Antifasciste published an article revealing where some of the key activists in the neofascist group Atalante Québec work. The objective was, as always, “exposing the fascists to their communities, colleagues, employers, families, and neighbours, from whom they generally hide the real nature of their activities […] because the projects they are involved in in their personal lives endanger both their immediate colleagues and the general public, most particularly racialized people, Muslims, Jews, queers, and leftists.”

Breaking with its usual practice, Atalante rushed out a communiqué to respond “aux propos diffamatoires incitant à la haine contre” eux [to the slanderous statements inciting hatred against] them and to the “fausses allégations lancées contre [nos] members” [false allegations made about (our) members]. Laughably, the communiqué responds to accusations we never made and twists some we did to make it easier for them to defend themselves. In particular, it attempts to portray Atalante and its militants as some sort of community-based charity organization that has absolutely nothing whatsoever to do with the “neo-Nazi movement” and is simply committed to “aid to families.”

Let’s be perfectly clear, we target Atalante Québec so heavily because they are a far-right organization directly modelled on European neofascist and identitarian movements like CasaPound (Italy), Groupe Union Défense (GUD), Troisième Voie, and Bastion Social (France) that are part of the revolutionary nationalist tendency (heirs to the Nazi Party’s Strasserist current) and were formed around the ultranationalist bonehead gang the Québec Stompers Crew and the Rock Against Communism band Légitime Violence.

If more proof is required, we’d be more than happy to oblige.

It seems as if they “doth protest too much”

From the get-go, the communiqué is a wee bit defensive:

[To begin with, Atalante is not a movement that promotes hatred of others, but rather, love of our own. . . . Furthermore, what consenting adults do in their bedroom is no concern of ours, which is why we reject all of our adversaries’ accusations, denouncing us as homophobes.]

This particular clarification is odd, to say the least, as the Montréal Antifasciste article that the communiqué claims to be responding to never specifically accused Atalante of homophobia nor has any other article that we’ve published. So why the vigorous rebuttal? It makes you wonder…

The following paragraph really ought to be accompanied by a mournful violin. Atalante’s social activity in “its milieu,” they tell us, includes “distributing food,” cleaning up graffiti, and providing “aid to families,” while their political activity is limited to “postering, publicity stunts, counter-demonstrations, commemorations, philosophical education, and physical training.”

Even leaving aside the fact that the political activity in question promotes an “ultranationalist,” viciously identitarian, and xenophobic project (hello, “remigration”!), presenting Atalante as a perfectly inoffensive community organization isn’t going to fool anyone—besides, of course, a handful of naive people who are taken in by this crass attempt to whitewash the true nature of the project.

They fulminate indignantly about us accusing “them” of having “agressé plusieurs personnes racisées et parfois à l’arme blanche” [attacking numerous racialized people, sometimes knifing them]. Again, this is odd, given that we did no such thing. What we did , in fact, point out is that a member of the Québec City Stompers, Yan Barras, also an Atalante militant from day one, stabbed six people in 2007 and was sentenced to two years in prison for this violent crime. It’s also true that in the article “Unmasking Atalante,” we reminded people that the group’s entourage includes a number of individuals who have been found guilty of armed racist attacks, including Mathieu Bergeron, Steve Lavallée, Jonathan Côté, and Rémi Chabot-Brideault. While we aren’t saying every Atalante member has been involved in attacks of this sort, the regular involvement of Mathieu Bergeron, for example, in Atalante’s actions and activities is enough to demonstrate that there’s a legitimate point to be made here.

The strident indignation that runs through the rest of the communiqué about the violence of the “antifascist groups,” including the absurd claim that “far-left websites” make “de fausses allegations contre [nos] membres (…) dansle but de les assassiner socialement, professionnellement et même physiquement” [false allegations against (our) members . . . with the goal of assassinating them socially, professionally, and even physically (our italics) are also perplexing, given Raf Stomper’s numerous explicitly violent threats in more than one Légitime Violence song:

[These little leftist sissies,
who dare to criticize us,
wouldn’t have the nerve to face us,
we’d just stab them all!]

[Play at your own risk, you know who we are.
A knife will rip through you, a noise, an explosion!!!(…)
We’ll beat you down and roll right over you.(…)
A mighty blow with a club,
and I hear your bones cracking.]

What we find most amusing about this insufferable whining has to be the claim that Atalante’s project “n’est pas animé par une logique raciale” [is not motivated by any racist thinking], that the allegations of Nazism amount to “defamation”, and that suggesting that people in Atalante’s entourage “advocate national socialism” reflects the “totalitarian doctrine” of the antifascist movement.

Rather than responding to this laughable attempt at self-exoneration with the gazillionth written document, we’ll let some photos and videos from various Atalante members’ social media accounts speak for themselves. 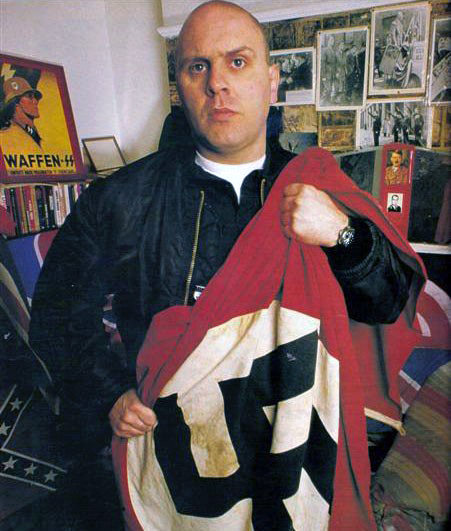 Ian Stuart Donaldson was the singer of the band Skrewdriver and the founder of the international neo-Nazi bonehead network Blood & Honour. Ian Stuart coined the euphemism “Rock Against Communism” to describe the galaxy of extreme-right bands with an ultra-nationalist/Nazi allegiance that were part of the “White Power” movement from the early 1980s on. Légitime Violence is heir to this tradition in Quebec, as are many of the “anti-communist” bands whose colours are often worn by members and supporters of Atalante, such as SPQR and Bronson (Italy), Brassic and Offensive Weapon (United States), In Memoriam and Lemovice (France), etc. In Canada, Blood & Honour is listed as a “terrorist entity” by the federal government.

Atlante’s entourage sing a Skrewdriver song around the campfire. Cute.

The Black Sun is an occult symbol cherished by the Nazis. It is integrated into the marble floor of the Obergruppenführer (generals’s room) at Heinrich Himmler’s Castle. It represents 12 sig runes nested around a black heart. This is an extremely common motif used by neo-Nazi and neo-fascist currents, especially paganists and eco-fascists. 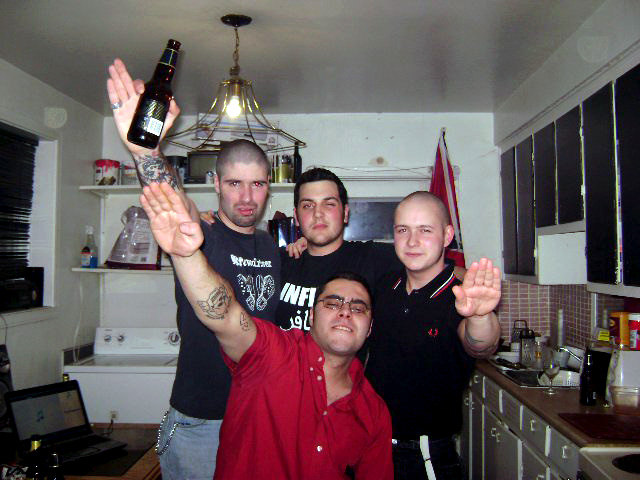 Atalante militant Mathieu Bergeron, in red, gives the Nazi salute. Behind, in the middle, is Gabriel Drouin, also a member of Atalante. 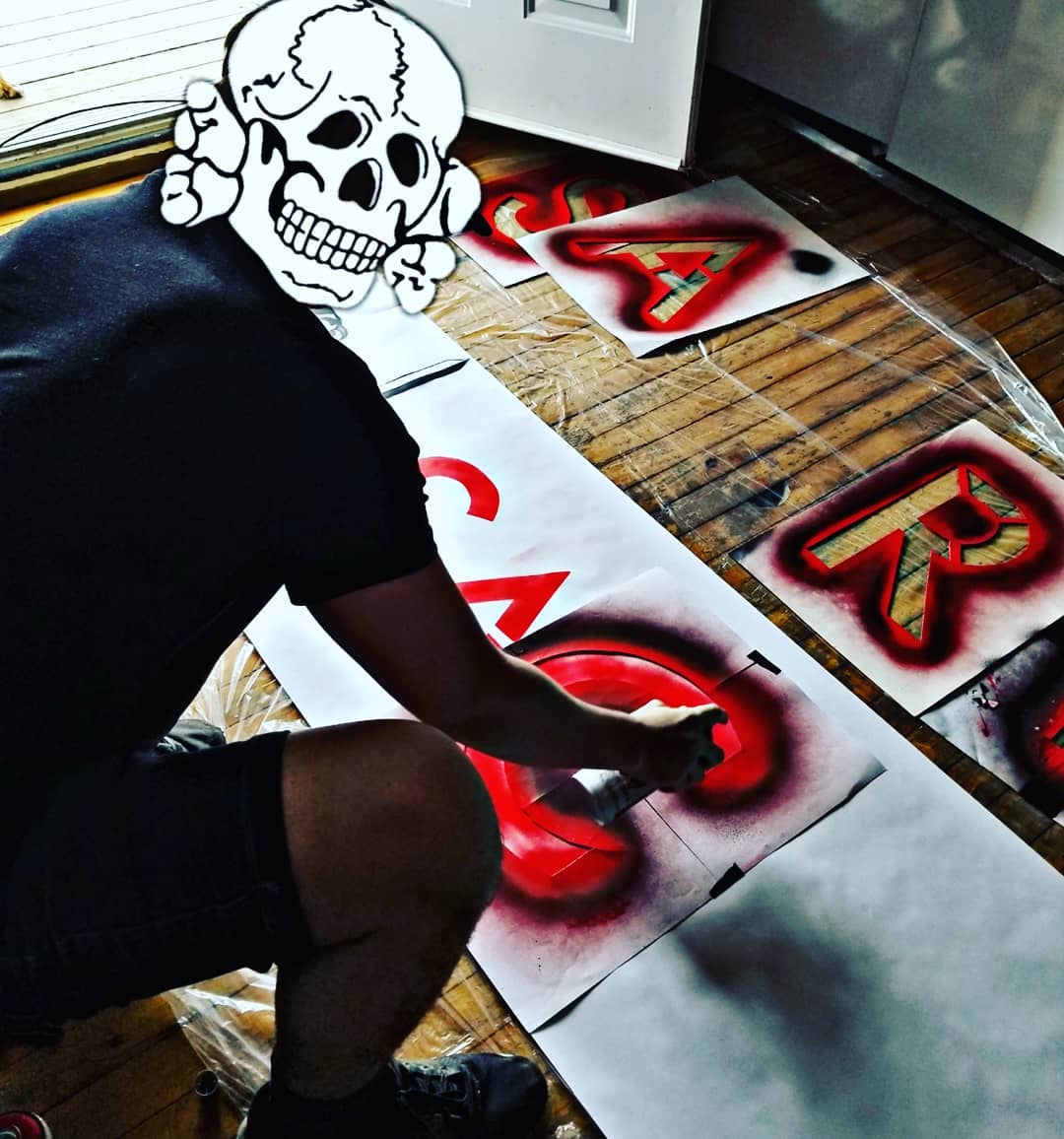 The Totenkopf, literally “death’s head,” is the emblem of the Waffen SS division that was in charge of operating the death camps. It is very common in neo-Nazi circles, and it is frequently used in photos to hide the identity of extreme right-wing activists. Here, a militant from Atalante paints a banner for a collage. From Jonathan Payeur’s Instagram account. 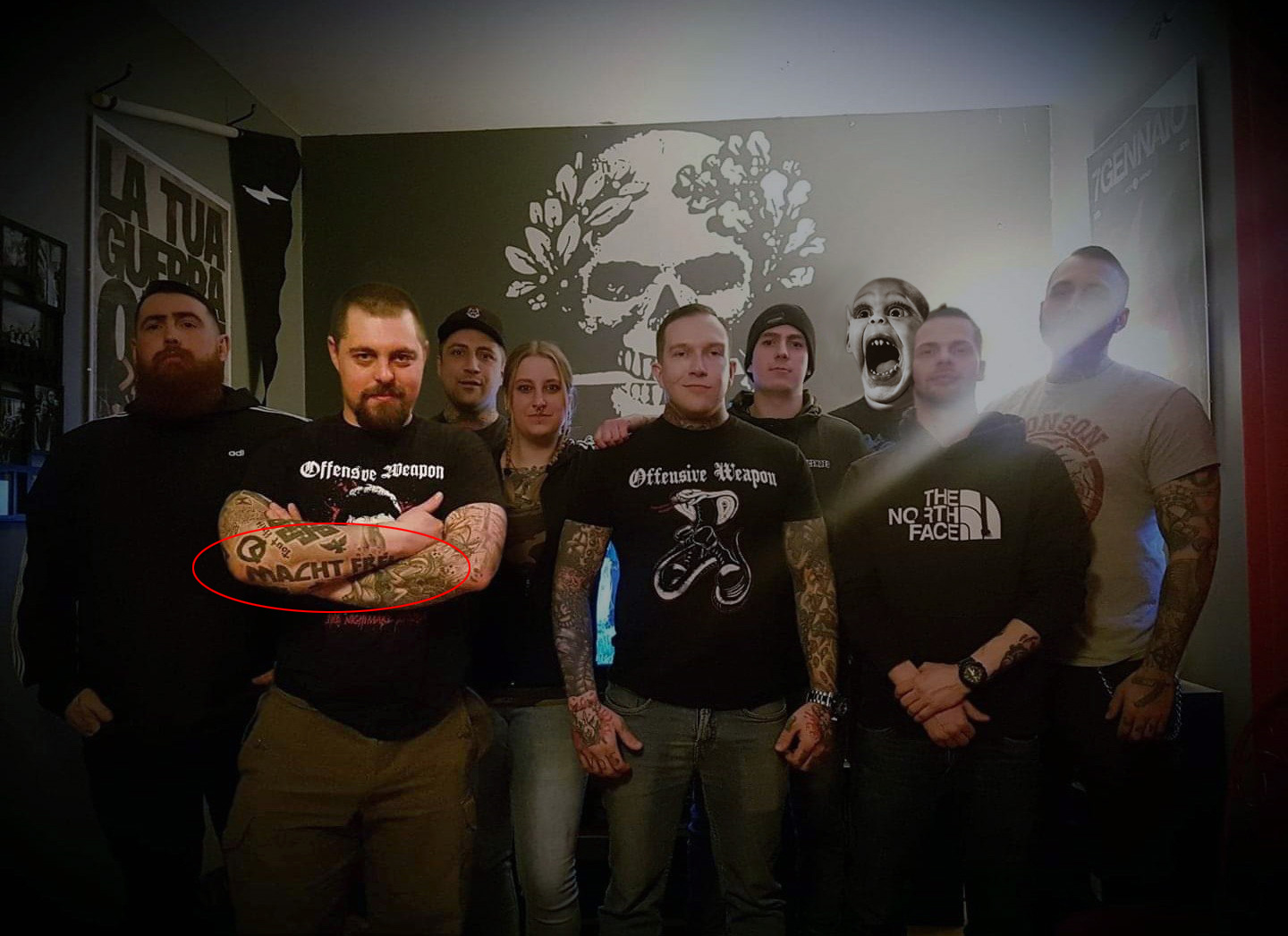 There are many references to Nazism among Atalante’s entourage. Olivier Gadoury, a member of the Quebec Stompers and an Atalante associate, has the inscription “Arbeit Macht Frei” tattooed on his forearm. This is the slogan inscribed on the gate of the Nazi extermination camp in Auschwitz. 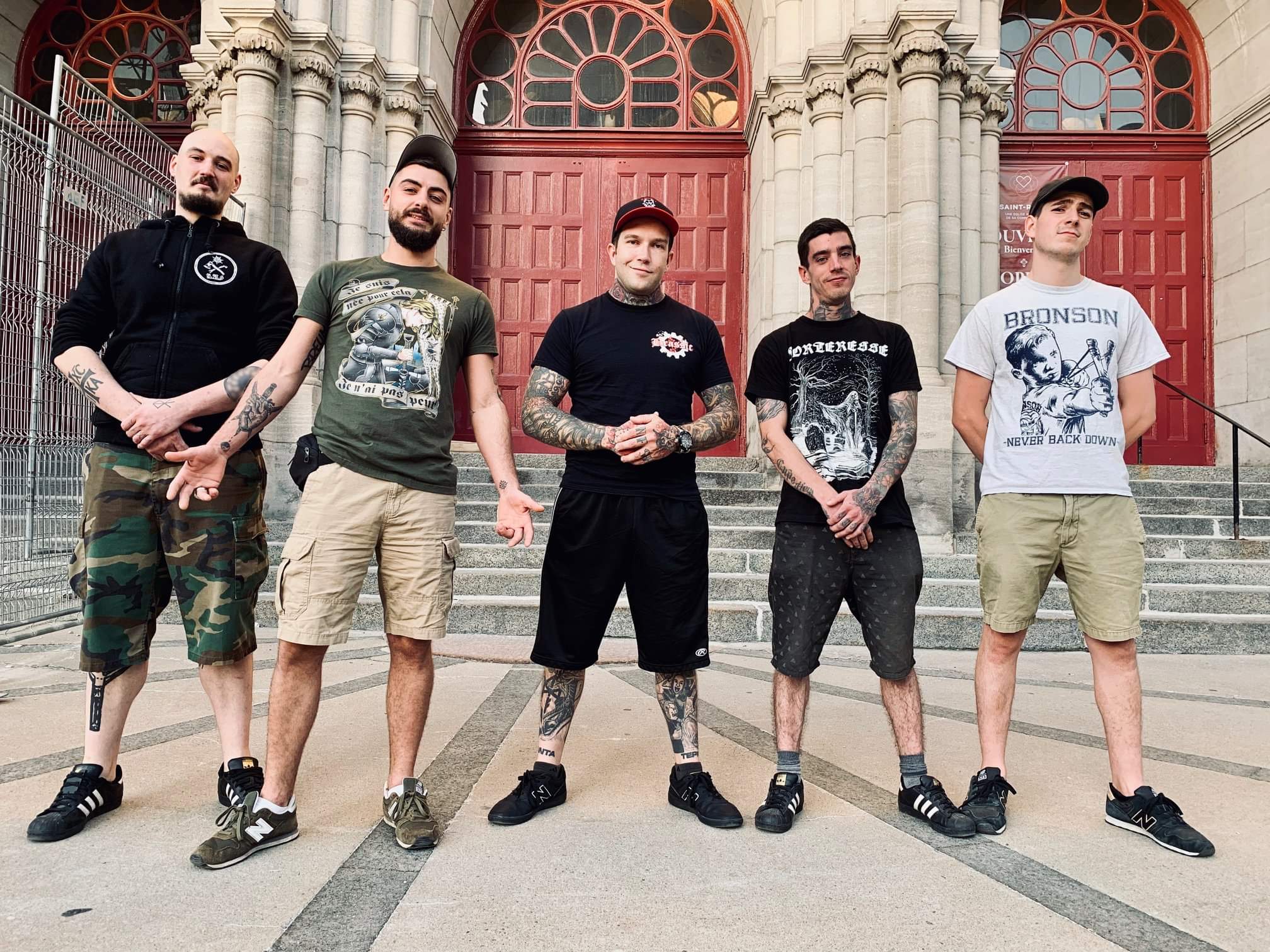 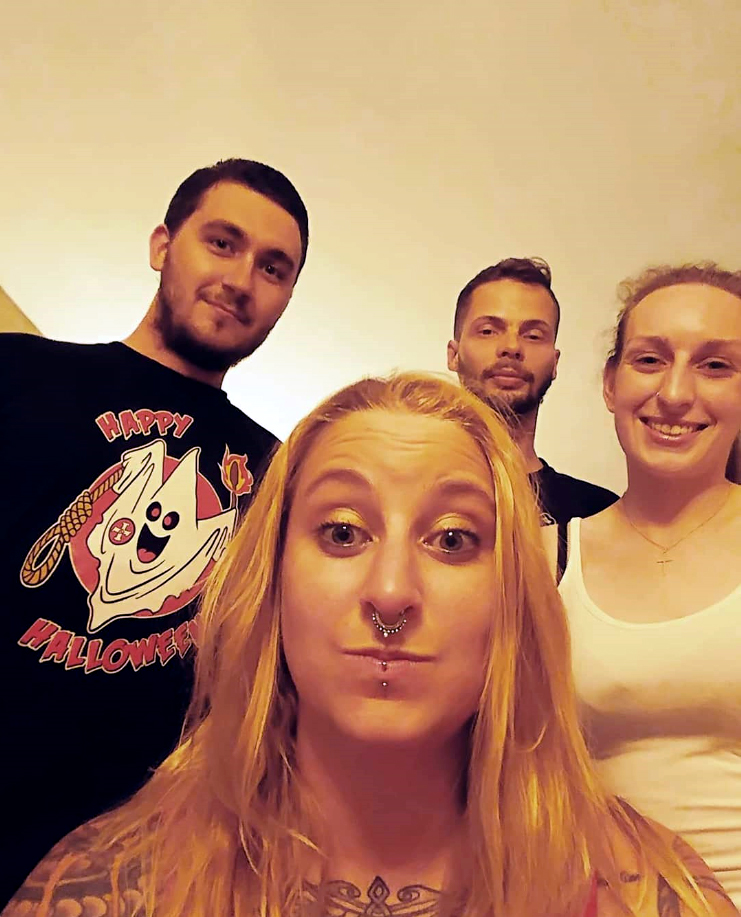 The t-shirt of Montreal-based Atalante militant Quentin Pallavicini is a “comic” allusion to the lynchings perpetrated by the KKK.

The Atalante ideologues would like the population to accept without a second thought their whimsical fable of a charitable organization at the service of the poor and downtrodden. Unfortunately for them, we’re not fools, and we have no intention of letting the population be deceived in this way.

People of good faith who want to play a useful role in their community can easily find organizations that devote time and money to helping people in need, particularly the homeless and those in financial difficulty, without supporting a bunch of attention-seeking crypto-Nazis.

As to the fascists who drag their pasty carcasses around to hand out a few sandwiches, it’s never too late to start doing some of the real work necessary to improve life in our communities and at our worksites… 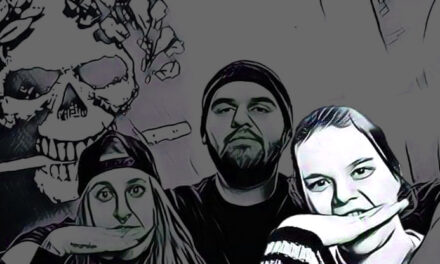 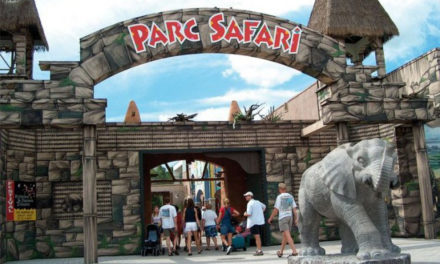 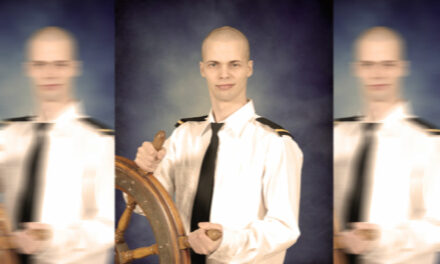 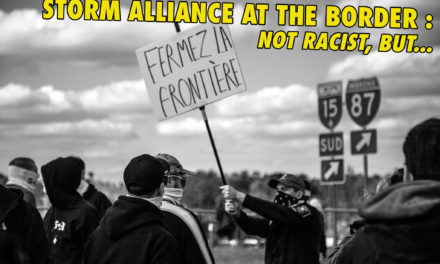